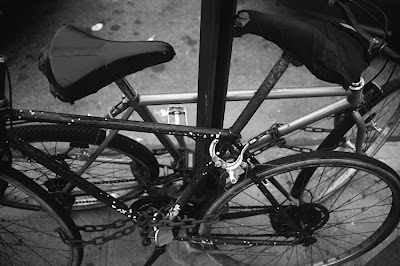 Bicycles. Coney Island, Brooklyn, New York, April 2003
It is entirely possible that these bicycles are still chained to this signpost, more than seven years after the fact.  There is an off chance their owners returned to reclaim them. It is more probable the New York City Department of Highways sent someone over with a bolt cutter, and released these simple transportation machines back into the wild.
Of all my years in New York, I can never understand why people wrap their bikes in Hulk-proof chains and hasp them with Brinks-grade locks, only to abandon them to time and the elements.
Posted by Robert Jones at 5:35 PM 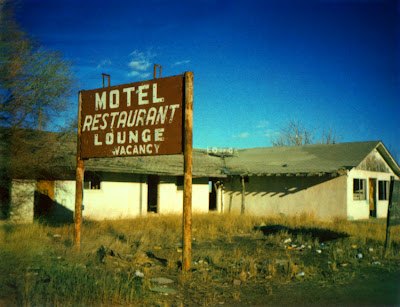 U.S. Route 87, Union County, New Mexico, February 2002
According to artist Deidre Adams, this place is still standing, at least as of early 2009.  I wonder how many decades or centuries America's ruins will hold up before ultimately being reclaimed by the earth.
Posted by Robert Jones at 10:59 PM 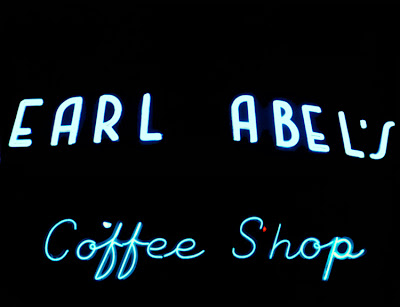 Neon signs from Earl Abel's fabulous restaurant and coffee shop
Broadway, San Antonio, Texas, October 2002
One of the many things for which I am most thankful, now that Thanksgiving in America is over, is the great diner food at San Antonio's fabulous Earl Abel's.  A fixture of San Antonio dining for almost a century, so were its customers at its old location, at the corner of Broadway and Hildebrand.
It was the kind of place that had its last facelift sometime in the late 1950s or early 60s, and where you could find comfort food freshly cooked, along with an amazing selection of scrumptious pies and cakes.  As the Welsh say, "lush."
I don't remember them ever having a "wall of fame," but everybody who was somebody stopped by the legendary eatery.  The most famous story about Earl Abel's was when Democrat congressman, Rep. Henry B. Gonzalez ate there.  A fellow diner called him a "communist," and Henry B. apparently wailed on him. True story (I think).  Who knows?  It's fun to tell.
This photograph was taken on Polaroid's legendary (and, also defunct) 669 film, a nighttime double exposure, with my trust Colorpack III camera.  For a tripod, I leaned against one of the convenient telephone poles which lined the sidewalk outside the restaurant.
Sadly, Earl Abel's -- the most beautiful example of Art Deco architecture still surviving in San Antonio -- met the wrecking ball in 2006.  It was bought out by Red McCombs, a car dealer who throws a lot of money around to local charities to make a big show of how magnanimous he is.  Instead of following his policy of benign neglect that he employed previously as owner of the Minnesota Vikings, McCombs razed Earl Abel's to make way for yet another boring high-rise.  Real class.
Fortunately, the Earl Abel's name was bought out by the Elias Brothers restauranteurs and though, architecturally, it's but a shadow of its former self, you can sate your appetite for lush food at its new location at 1201 Austin Highway.
Posted by Robert Jones at 12:28 AM 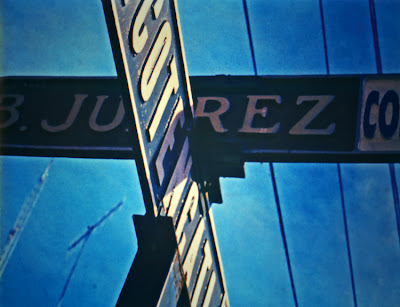 Street signs, television aerials, telephone lines
Piedras Negras, Coahuila, Mexico, c. 1999-2000
This one is too close to my heart and it hurt a lot to excise it from the book.  Yet, it stands alone quite nicely, and takes me back to the smells of burning mesquite and roasting pine nuts.
Posted by Robert Jones at 9:36 PM 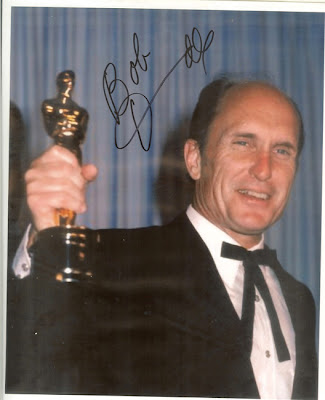 Actor Robert Duvall is an outspoken conservative in
Hollywood, whilst many thumb-sucking conservatives
are afraid to step out of the closet.  Universally
recognized as a master of his craft,
here Duvall hoists his Best Actor Oscar
for 1983's Tender Mercies
I hate political art. Political art is not for me. I am uncomfortable with it mainly because its foremost practitioners’ politics are way stronger than their art – and their politics suck.

Yet, if you are like I, you know viscerally what it feels like to be a conservative artist, especially if you’re one who takes his art seriously.  It feels lonely as hell.

Especially if you won’t sell out.  It has not been news that the art world is peopled with flaneurs, shockers, and other assorted pretentious dilettantes who pose at being outcasts.  But, you know who the real outcast is: It’s you.

By day, you’re just some guy or girl with a workaday job.  You save up enough loose change and singles to finance what your family regards as your “eccentric hobby.”   The earmarks of your passion are the oil paint you can’t fully scrape out from under your fingernails or the smell of photo fixer you can’t get out of your skin and clothes no matter how often you wash them.

You hide your political beliefs.  You know you’re not a liberal, a progressive, or one of those mindless lemmings who’ve “gone green.”  But, you’re struggling in your art career, and your position in the gallery scene is too precarious to let people know the “real you.”

So, you become a bifurcated self, hoping to avoid a confrontation with the movers and shakers, those oh-so insouciant curators in black turtlenecks, whose opinions you secretly despise whilst simultaneously craving their imprimatur.

You swell with a strange kind of “half” pride when you finally see your work hanging in one of those trendy galleries.  You’re “half” elated when a collector buys one of your pieces.  You convince yourself that you’ve kept your art “pure,” because you’ve kept politics out of your art – while hiding your personal political beliefs from the majority who automatically assume that because you’re an artist that you’re also a leftist.

You make yourself believe that you’ve kept yourself “above it all” by not stooping to the same level as the rest of the art community. Yet, deep down, you also know the very minute your secret political self is unmasked, that you will be blackballed, that so-called “friends” will drop you like a hot potato, and that in the art world you’ll be persona non grata.

You’ve censored who you are in order to stay safe, fit in, and pass by unnoticed.  But your real self looks upon your artist self with nothing but scorn and shame, because deep down, you fear that you have sold out in some more insidious way than by prostituting your art.

You tell yourself it’s not your fault, because you know that the selfsame “tolerant” lefties have stacked the deck against Republicans, conservatives, and libertarians.  They get away with it because of Political Correctness, you tell yourself.

But then, from out of the past comes the stinging rebuke that maybe they are not the only ones culpable for this bad scene.  The admonition that, “All that is necessary for the triumph of evil is that good men do nothing,” echoing in your mind comes not from Edmund Burke, but your own conscience.

Yes, when the intolerant left finds out about your clandestine conservatism, of course your art career will be ruined:  You have already abdicated the sanctity of your conscience by prostrating yourself before people who hate what you stand for.  Why should they suddenly respect you when they already know you’re lacking in spine and stomach?

Or, you can take some schooling from Don Vito Corleone: “You can act like a man!”  I have never had the problems so many conservative artists have with liberals because I have never played this self-defeating charade of hiding my political beliefs.  I don’t bash people over the head with them, but at gallery openings and such I don’t let an insult go by without at least offering an “I disagree with that.”  If you are forthright about who you fully and truly are from the start, then you set the terms by which others deal with you, not they.

Do you see the Tea Party movements the past couple years, filled with people who found the courage to stand up and defend their cherished beliefs and the Constitution of the United States of America?  These are regular guys and gals who finally realized that being consoled by their membership in the “silent majority” was a fool’s bargain – their opposition was only too happy to oblige their silence.

What am I asking of my fellow artists?  To join Liberatchik?  Sure, but Liberatchik is merely a symptom of the problem, not the solution.  True solutions to the ills that plague society seldom rest in collective action.

The solution rests in being true to yourself, and standing up for your beliefs as an artist, as a citizen, as an individual.  What is needed, now more than ever, are individuals whose purpose in life is to fully engage in the pursuit of their happiness, not in wanting to be liked by everybody.

Take a look at Frances Byrd’s and Irene Deely's examples.  These Jeanne d’Arcs of the conservative art movement are out there, standing on their own feet, facing the fire, but succeeding.  They're succeeding because they're true to their art, true to themselves, and their souls are not for sale.

Take an assessment of your own life as an artist, your own soul.  You will be welcome by us at Liberatchik, should you so wish, not because you’re “one of us,” but because you’re true to yourself. 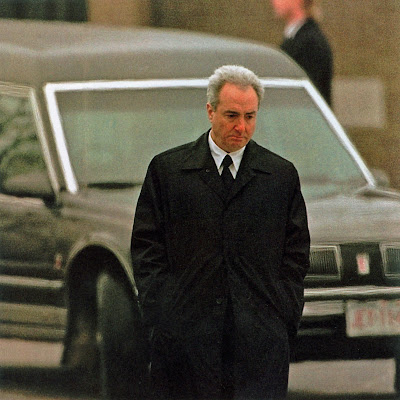 Lorne Michaels at the funeral of Chris Farley
Madison, Wisconsin, December 1997
Photograph Copyright © Associated Press, 1997
I am usually unmoved by photographs.  By that, I mean while I can almost appreciate them the same way I do music, they usually don't resonate with me to the point where an emotion washes over me, like listening to Rachmaninoff, or Led Zeppelin; the appreciation is usually more intellectual than visceral.
Yet, almost thirteen years after the fact, this photograph by an Associated Press photographer still shakes me to the core.  It is the only photograph I've ever cried over.  It is a straightforward composition of a man at a funeral, standing before a hearse, his face caught in a quiet moment of utter devastation.
Lorne Michaels had already gone to a number of funerals of cast members from Saturday Night Live, most notably John Belushi, writer Michael O'Donoghue, Gilda Radner, early guest Andy Kaufman.  But the overdose death of anything-for-a-laugh fall guy Chris Farley clearly shook Michaels.  Looking at this simple composition, I can fully feel the pain of a father's anguish over the loss of his son.
Less than six months later, Michaels would attend the funeral of hilarious straight-man Phil Hartman, who was murdered in his Encino, California, home by his wife Brynn.
Posted by Robert Jones at 10:36 PM