Guitarist, Piedras Negras, Coahuila, Mexico, March 2001
As Garish: Roadside Polaroids goes through its final tweaks and polishing, as it goes to press in the Fall, I am pleased to announce work has begun on my next volume, Los Colores de Coahuila, my excursion through the cities and villages of the Mexican frontier state of Coahuila, along the Texas border.
Juan Torrescano, in his essay for the book, comments,

Robert Jones declares he does not want to use his images as a "deep" philosophical vehicle, nor does he want to concentrate on historical subject matters, but his images speak precisely to these topics (but without the verbiage to get in the way of his imagery): The aged troubadour, who dexterously strums his lira to please his improvised clients, the popsicle vendor who tirelessly runs through the broken pavements and alleyways with the desire to exhaust his goods, the proud rancher who places his hopes in the next season's harvest -- not to mention the spotted furious cock ready to enter into battle. The colorful juggling street clown in full attire, the snapshot of the smiling family, and what about the fortezza vecchia of the National Emblem, the effigy of the Patron Virgin of Mexicans? The flower vendors who avidly conquer their lady with a beautiful bouquet, as well as the figures of San Martin De Porres, the elderly woman, the barber, and the emerging mysterious gardener, the fresh fruit vendor, the roses in the church atrium, as well as the tower, and the stained glass windows. Or the scenes of  dogs and felines lounging in the sun, and the wide range of multicolored, stripped and weathered facades, doors, and windows. All this -- for the people of the border -- is a standing ovation. It gives integrity to a bland environment of brick walls  without decoration, or older houses that speak only of their abandonment. 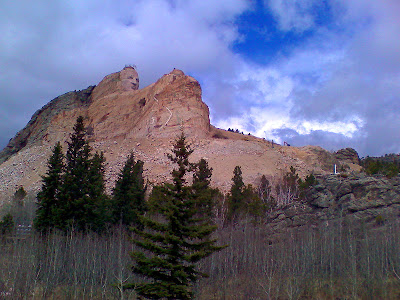 Crazy Horse Mountain Memorial, scultpted from an original model by Korczak Ziolkowski
Crazy Horse, South Dakota, April 2011
Of course, no camera phone could ever do justice to Korczak's immense mountain, which has since 1948 been transformed into a man and his horse.  But then, no camera could do full justice to this larger-than-life labor of love. This amazing rendition of the Lakota warrior Crazy Horse is a work in progress, still approximately five decades away from completion.

Located just miles from the famed Mount Rushmore, which Korczak was apprentice to Gutzon Borglum on in the late 1930s, Crazy Horse Mountain dwarfs the Presidential busts.  Indeed, all flour faces could fit inside of Crazy Horse's head. To understand the height and breadth of Crazy Horse Mountain, consider that it is taller than the Washington Monument and broader than the Great Pyramids and Giza.

What most impresses me about Korczak Ziolkowski was that ever since Lakota Chief Henry Standing Bear invited him in 1939 to carve Crazy Horse's likeness, not one penny of government money has gone to support its construction.  On principle, Ziolkowski refused a $10 million offer from the Federal Government to "help" him sculpt his mountain.  The Boston native was a rugged New England individualist, in the mold of Emerson, and didn't believe in sticking his hand out.  He knew that there's nothing "free" about government money, and that it always comes with strings attached.  He probably also knew that in the case of his sacred mission, it would be blood money he was accepting.
Posted by Robert Jones at 9:46 PM 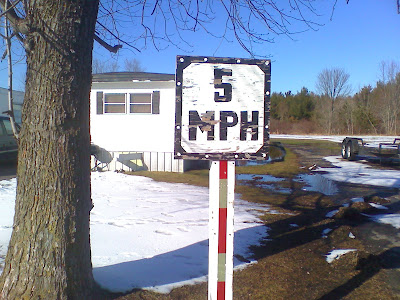 U.S. Route 12, near New Lisbon, Wisconsin, April 2011
The simple eloquence of these hand-painted signs is disappearing in a rapidly standardized world. Before long, we'll all be forced to use kilometers, and to purchase the signs from government-approved manufacturers.
Posted by Robert Jones at 3:21 PM