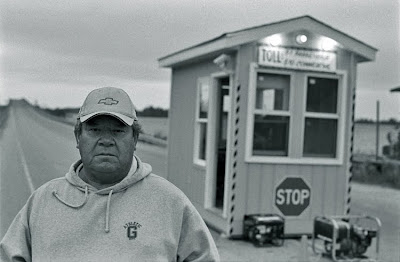 Councillor Dan Mainville stands before the toll booth
erected by the Couchiching Nation on Highway 11
before the bridge crossing over Rainy Lake
I was in Western Ontario vacationing about a week and-a-half ago, and read in the Thunder Bay Chronicle Journal that members of the Couchiching First Nation had erected a toll booth on Ontario Highway 11, which is also the Trans-Canada Highway extension, and only one of three routes into the city of Fort Frances.
As it was on my way of my trip's route, I went there to check it out, and talked with many members and a councilor from the Couchiching First Nation.  For decades their land -- which was granted the tribe by the federal government of Canada -- has been a hazardous materials zone: The tribe's members residing on the reserve land live on the grounds of a former sawmill, whose processing left the land poisoned with unsafe levels of chemical byproducts. 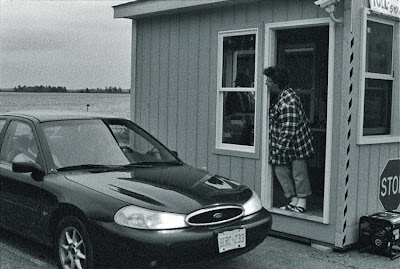 Susan Smith immediately volunteered to work eight-hour
shifts collecting tolls.  "I live in Fort Frances, but
this is my community," she said.  "I've lost friends over
this issue, but we have to do what's right for our
community."
According to Nation member Ed Yerxa, "The government has studied the soil contamination, and their assessments confirmed ten times the base unsafe level of both furon and dioxin.  If you had people cleaning up this mess, they'd be wearing protective suits against the contaminants.  Yet, we have families, children, and elders who have to live here every day."  Of the 1,800 total members of the Couchiching Nation living in Canada and the United States, there are approximately 650 members living on the reserve lands in Ontario.
After the studies were completed -- some, decades ago -- both the federal and provincial governments did...nothing.  No cleanups were forthcoming, however, according to Dan Mainville, Council to the Couchiching First Nation.  "The federal government made us a cash offer," Mainville explained, "which we turned down.  Over the years the offer went up to $2 million [Canadian]." 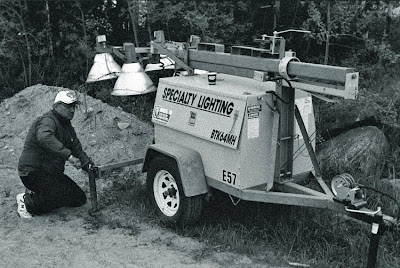 Ed Yerxa prepares industrial outdoor lighting as night
approaches, to ensure safety of toll collectors and
motorists. "We worked with the Ontario Provincial
Police to make sure that putting up the toll booth was
done peacefully," Yerxa said.
Wanting nothing more than their governments to live up to their obligations to First Nations people, the Couchiching voted to peacefully erect a toll booth on the highway -- which runs through their tribal land, and for which they have never been reimbursed under Canadian eminent domain laws.
All during the day, I queried non-Native Canadians for their opinions on the Couchiching collecting a $1.00 toll on Highway 11, which runs through their sovereign land.  Half of the responses from non-Indians were along the lines that it was "extortion," and that the Couchiching were "bullying" the "captive motorists."  The other half were politely non-committal, but I only met one non-Native Canadian squarely behind the Couchiching's efforts.
Yes, I personally witnessed no behavior by the toll collectors matching these fears, rumors, and preconceptions.  The two women taking tolls, Susan Smith and Holly Cogger, did not demand payment, and although many drivers sped past the stop sign on the toll booth, when other motorists slowed down (but did not pay a toll) the two women were cordial, and politely thanked the motorists for safely reducing their speed. 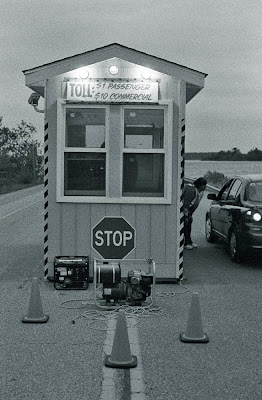 Holly Cogger, about to collect a loonie from
a motorist entering the Couchiching First
Nation. "I'm doing this for my children
and grandchildren," she said. "This land
belongs to them.  We're just caretakers.
We have to make sure this land is in
good shape to pass on to them."
Fortunately, the Couchiching's message was heard loud and clear by the government, and down came the toll booth, less than two weeks after its erection.  According to Minister of Parliament John Rafferty (N.D.P.):

While I am satisfied that the public health hazard faced by these families on the Couchiching reserve has been resolved, I am very disappointed that an agreement was only struck after public action was taken by the Couchiching leadership.   It is my understanding that the federal government paid $1.7 million for two engineering reports that were completed several years ago and showed that dangerous chemicals were present (i.e. dioxins, etc).  I’m thankful these families will finally be relocated, but the burning question that I still have is 'what took so long'?

Sara Mainville, another councilor the the First Nation and niece of Dan, exclaimed:

Peaceful activism in defense of one's sovereign rights -- no matter whose -- is always a great thing.  Pilamaya, Couchiching!